Hello Beautiful People Of The World!!!

Ok today I've mixed up feelings about a lot of things. I went to sleep with a nice feeling.. the calmness and serenity that made me smile in my sleep. I woke up still feeling happy but within minutes, I got a phone call that annoyed me to the bone. Arrrgghhh!!!!

Well, anyway, There's no point dwelling into the negatives. So today's post is about those simple things that can make me smile even on my worst day. 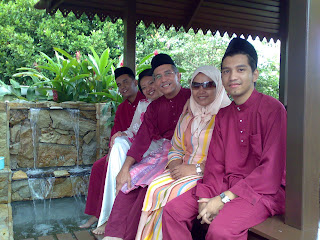 My Family.. Not a big one, a powerful one nonetheless. Love and support are always offered and received. I am blessed! 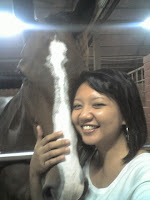 Horses.. Especially this particular hunky horse called Perkasa. He knows just how to make me laugh even when I was crying. He loves to lick and are always happy to see me no matter what time it is. 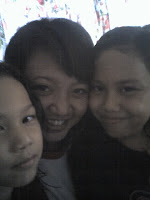 Children and their earnest ways cheer me up anytime anywhere. Treat them with respect and you will get the same respect from them. 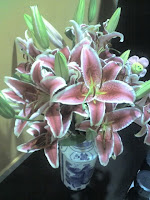 Lillies! Gorgeous lillies. The sight and smell of this heavenly flower never fail to make my heart skip a beat. Gorgeous! 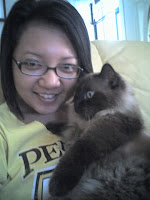 Lately, this particular cat. She comes in everyday at around 10pm, goes straight upstairs, inspects the whole upper floor and then comes down by my side and just lay there as if its the most natural thing in the world. She would stay until I fall asleep and she's always gone in the morning.. I don't know where she comes from or what her name is. But I call her Anita..

So there you go.. I guess its true when they say the best things in life are free.. I am truly blessed.

No, bobob is not a person. He's actually a horse. And of all the horses, I love those who like to lick and play with his mouth. So this Bobob likes to do just that.
Yesterday, I went to Kiara to visit him. As usual, I patted his mouth and he started licking my palm.. I paid no attention to him coz usually he would just lick away. But yesterday, after licking my palm for a while, he bit me! Arrgghh sakit gila!!
So skang tangan aku dah lebam kena gigit...
Hampeh!
Just My 2 cents- Wife, Mother and Daughter at 3:48 PM 6 comments:

Mr Mat T, Capt B, Mr S and me are lounging on Capt B's nice & comfy sofa. Watching Federer half-heartedly on the telly.

Then suddenly, cutting my interesting story, Mr S jumped in..

Then Mr Mat T and Capt B started singing something I don't even want to mention here..

MALU GILA WEI!! Kang dia kata aku lak terhegeh2!! Ada ke aku cakap? Aku rasa takde.. Maybe a misunderstood joke? Did I even joke about it? Takde kot.. Arrgghh whatever..
All I know is I'm not looking right now and there are better things to do in my life than to interfere with Gods plan. Bukan ke jodoh pertemuan, ajal maut ditangan Tuhan?

I went for my second check-up at klinik berhenti merokok tanglin yesterday. I know.. I know.. A lot of people quit smoking just like that but I just wanna make sure that my plan to quit is not just a plan equipped with 1001 excuses. I wanna make it work this time so I thought it wouldn't hurt to get some support and back up. Besides, its free.. so why the hell not? (I LOVE MALAYSIA!!)

Anyway, every time I go for my weekly appointment, they will check my blood pressure, my weight and carbon monoxide (CO) level in my lungs. The first time I blew into the freakish machine, my CO level was 21. 21, mind you. Which means that almost 50% of my blood is rejected by my body already. During my first visit, the clinic was packed with a lot of guys, most of them in their 40s and have been smoking their whole lives and the highest among all of them was 13. Mine was 21! So when the loud nurse announced my number to the crowd, their jaws dropped. They just stared at the only lady patient in the clinic with disbelieve. I was taken aback by the sudden attention towards me and seriously didn't know what the most appropriate reaction should be. So I decided to jump up and down while shouting "Yey!! saya menang!!" Hahahaha.. it was hilarious!. Seeing their stunned faces was just priceless!

Then, during the talk by the doctor, using a chart, she explained to each and every patient their level of CO and what its doing to the body. When it was my turn, the doctor just kept quiet for a bit. She kept looking at the chart and said nothing. You know why? Because she didn't know what to say to me. Because the highest number in the chart is 20. hahahah. Mine is 21.

Being the only female in the whole lot (and being the loudest kot) I got special treatment from the doctor. Instead of the normal yucky nicotine gum, I got the fruity flavoured gum. And I also got the patches as well.. (the rest of the guys didn't get the patched even when a few of them asked for it) Because according to the doctor, "a pretty girl like u shouldn't smoke or chew too much gum..". hahahahaha... fewwittt..

I'm all ok now.. just with occasional tantrums. But lately I cried a few times with no apparent reason. I'm not sad or anything.. I just felt like crying.. I mentioned it to the doctor and she said as long as I'm not feeling suicidal or something like that, I should just cry my eyes out.

So there you go.. For all the sceptics out there, I can quit, and I have. Say what you want. For those who want to quit but feel its too hard, contact me and we can go to the clinic together, if you need moral support. The clinic is provided by the government for the people. It free. It gives all the ammunition like patches, gums, vitamins for free. The same nicotinelle patches that you can get from pharmacies would cost you minimum RM80 per box. And a box would only last for only one week. So you do the math.

Till next time, take care of each other peeps..
Just My 2 cents- Wife, Mother and Daughter at 9:32 AM 3 comments:

Today marks the 2nd day of me without cigarette.. I had my doubts about quitting so I went to one of those klinik berhenti merokok thingie. And surprisingly, it was quite good.. They are gonna do a weekly monitoring on me.. And the first step is to announce to the world your desire to quit. So that people would stop offering you ciggie and start supporting and encouraging you.

So here I am announcing to the universe...

APPAI IS A NON-SMOKER NOW!! PLEASE BEAR WITH HER!!

This is actually harder than I ever imagined. Arrggghh!!

I need all the support I can get from everyone. And by support I mean be patient with me when I get irritated, remind me not to drink coffee, let me rest when I yawn like nobody's business and never ever smoke in front of me at least for a month! These symptoms are called withdrawal symptoms. Its a result of nicotine withdrawal from your body. And the body is actually doing its job cleansing my organs from chemicals and toxins. Arent our bodies great! (Subhanallah!!)

Oh ya.. and remind me to jog. As I could gain some weight because food would actually taste and smell better when I don't have all these chemical in my body.

Oh by the way, thank you for all the birthday wishes.. Thanks Amir for the gorgeous red bean bag, Thank mr anonymous for the perfume, thanks Mus for the book and dinner, and thanks for the rest who actually remembered my birthday.. Thanks you guys.. u're the best!