I love my Agong! I seriously think that he is the most humble leader in Malaysia and the entire world..

May Allah bless you..
Just My 2 cents- Wife, Mother and Daughter at 2:57 PM No comments:

I know I mentioned in my last post that I have no desire to talk about our reception, but in light of this new information, I have to tell a little bit about the event..

See, our aim when planning the reception was to do it moderately, with the environmental friendly concept in mind.. which means to focus and spend more on good food, and do the rest ourselves. So I did my own make up and hair, got Hajar (my SIL) to design the card and printed it on recycle paper ourselves (without envelope because nobody keeps envelope right? so why not save some trees), and as for door gifts, we decided to educate our guests.. At the same time, we want the door gift to really portray 'us' as a couple.

Since we both love diving so much (and the fact that we met underwater in Redang), we commissioned a friend of mine (Mims) to draw (or stoodle as she calls it) a picture of us diving. The stoodle turned out great! We printed that stoodle on a brown bag, which by the way costs us around RM6 for a bag of 100pcs brown bags.. on the reverse side, we printed something that we think everyone should know.. 5 ways to help protect the coral reefs.. On our first draft, I listed 10 equally important ways to save the reefs but since the bag was not big enough, we slashed it to 5.

The reason we chose the brown bag other than its super cheap, is because we just wanted the bag to be a medium for our real gift, which is the knowledge/awareness as well as 3 pieces of bahulus made by my mom.. And even if people were to chuck the bag away just after they enjoy the bahulus and read the information, I wouldnt feel the heartache.. Hopefully they're gonna take the information printed on it and keep it with them for the rest of their lives..

Now for the bahulus, they were made by my mom. Since at that time she was seriously planning to start a bahulu business after her retirement, we thought that the least we could do was to help her advertise her business.. So again, we designed a simple card for the bahulus. I did a short story, just like I would write a blog, and place it in the bag, together with the bahulus of course.


We glued the handle made of 'tali guni' ourselves and begged our friends to help us insert the bahulus in the brown bag..

Well anyway, a few days after the ceremony, we had a chance to visit the MIDE (Malaysian International Dive Expo) in PWTC. It was there that I approached the Aware Project counter and told them about our little bag. They were so thrilled by our effort and insisted that we posed with the bag for them.

Long story short, we were featured in their blog and website.. (The 'chinese' bit was incorrect but what the heck..). So check it out!! This made it all worth it!! Our plan to educate only our guests turned out to be more than that.. We wouldnt have done it any other way! We couldnt ask for more.. 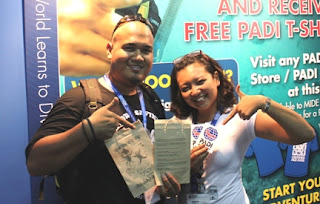 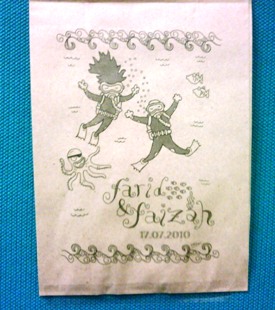 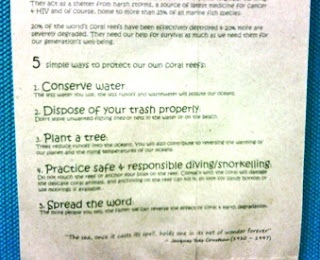 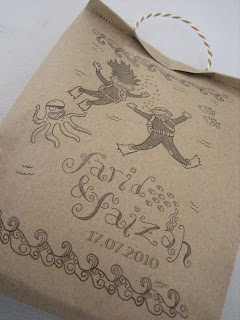 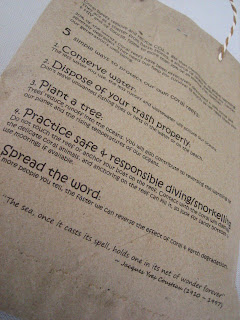 So thats it! Thats how we became project AWARE celebrities.. Which is way better than appearing in Vogue for us..

Its been ages, I know.. I've been wanting to write but somehow I managed to create millions of excuses not to.. Well, the truth is, I miss it.. I miss this.. I miss just letting my head free and ramble on about everything under the sun..

Ok enough of that.. Now lets talk about the recent activities.. (where do I start???)

I am now married.. the ceremony was held in July. 10th was the solemnisation in Bangi & 17th was the reception in FRIM. (since we are both from KL, we did it only once)

Now the costing.. why do people think that getting married will cost you an arm and a leg? Is our society too obsessed with what people think and say? I heard recently about a couple who is getting hitched in a 80,000 ringgit wedding ceremony.. That is not including hantaran, mas kahwin & honeymoon. Why??? The couple is of an average income family and the money they used is actually a loan from a bank.. Why spend all those money for something that will only last 5 hours? Wouldnt it be more wonderful to spend the money for a honeymoon? or a new house?

Is it worth starting a new life with a new partner with loads of debts? For what? For a night of glory? No thanks..

And then there's this thing I heard of late called 'pre-wedding photo-shoot'.. Why people? Whyyyy?? That photo-shoot alone would cost more than 1K.. Then the couple would still do a photo-shoot on the solemnisation day and then again on the reception day.. The whole photo-shoots would then sum up to more than 3K. And that is if they use an average photographer. If they were to use a more experienced shooter with a strong portfolio, of course the fee would be higher. But that is beside the point. Why pre-wedding? Why do you want to pay people to document you touching, hugging and committing sins with your partner before you become legally partners?

I understand the non-muslims doing it.. They are not MUSLIMS! enough said. Clearly muslims are forbidden to even be alone with the partner.

All in all, I support all those who wanna get married, as long as it is done in moderation and done because of the right reasons.. When a wedding ceremony is done to show your wealth and to be boastful, then it can become sinful... 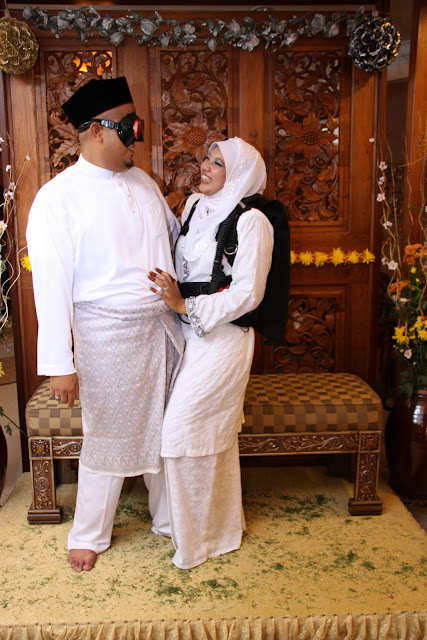 I want a brand new house on an episode of Cribs
And a bathroom I can play baseball in
And a king size tub
Big enough for ten plus me
(Yeah, so what you need?)

I need a a credit card that's got no limit
And a big black jet with a bedroom in it
Gonna join the mile high club
At thirty-seven thousand feet
(Been there, done that)

I want a new tour bus full of old guitars
My own star on Hollywood Boulevard
Somewhere between Cher
And James Dean is fine for me
(So how you gonna do it?)

'Cause we all just wanna be big rockstars
And live in hilltop houses, drivin' fifteen cars
The girls come easy and the drugs come cheap
We'll all stay skinny 'cause we just won't eat

I wanna be great like Elvis without the tassels
Hire eight body guards that love to beat up assholes
Sign a couple autographs
So I can eat my meals for free
(I'll have the quesadilla, ha, ha)

I'm gonna dress my ass with the latest fashion
Get a front door key to the Playboy mansion
Gonna date a centerfold that loves
To blow my money for me
(So how you gonna do it?)

'Cause we all just wanna be big rockstars
And live in hilltop houses, drivin' fifteen cars
The girls come easy and the drugs come cheap
We'll all stay skinny 'cause we just won't eat

Well, hey, hey, I wanna be a rockstar

Well, we all just wanna be big rockstars
And live in hilltop houses, drivin' fifteen cars
The girls come easy and the drugs come cheap
We'll all stay skinny 'cause we just won't eat